Near a hundred kilometers of beaches of an exceptional quality located at Santa Lucía Beach and a group of surrounding keys, is the main and most renowned tourism attraction of the province of Camagüey. This province covers 15 900 km2 of the central-east region of the Cuban archipelago, and the two main pillars that sustain its economic development have traditionally been the sugar and cattle industries.

The birth of Camagüey as a capital in Punta de Guincho, facing the Bay of Nuevitas, dates back to February 2 of the year 1514. Camagüey was one of the first seven villas founded by the Spanish colonizers in the Island and baptized as Santa María del Puerto del Príncipe. 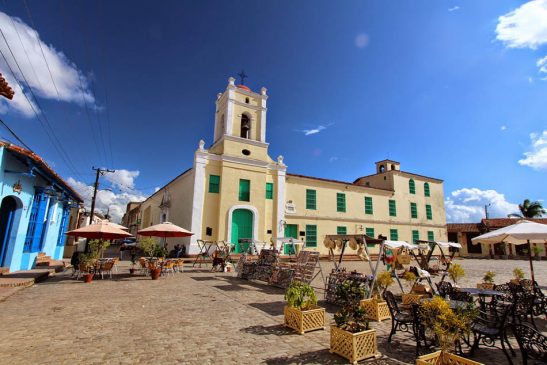 Nevertheless, it was only on January 6, 1528 that the capital was definite and paradoxically moved to its current location, between the Tínima and Hatibonico rivers and well away from the coasts, to avoid the frequent attacks of pirates and corsairs “according to some historians” or escaping away from plagues, the infertility of the soils and the lack of water; according to the opinion of other specialists.

Most of the foreign visitors who come these days to this tourist destination, through the services of the Ignacio Agramonte International Airport or by road when driving from other regions of the country, are attracted by the natural charms of Santa Lucía, particularly by its 20 kilometers of sandy beaches, and the warm and transparent waters protected by the second largest Coral Reef of the Planet, which stretches to the west along near 400 kilometers parallel to Sabinal, Guajaba, Romano and Cruz Keys and extending up to Varadero.

It is precisely in front of Santa Lucía that the Coral Reef is closer to the Cuban coast. As close as 200 meters from the shore, it is possible to dive into the fascinating world of 50 species of Coral, 200 species of sponges, near 500 species of tropical fish and, on top of all that, the remains of at least 27 sunken ships.

The diving area covers a sector of 5 kilometers and it has limits to the east with Lavanderas Reef, and to the west with Playa Bonita and La Boca, a peaceful semi-isolated place that sits next to the entrance of the bay of Nuevitas and very close to a colorful village of fishermen.

The Black Coral; the “Cuerno de Ciervo” (Dear’s Horn); the “Ramillete de Novias” (Bride’s Bouquet); purple, orange or yellow sponges; shads, snooks, levisas, skate, green morays, among several hundreds of species constitute the population of this sea bottom, where you can also find the remains of the Galeon Fernando Estela and the ships Mortera and Nuevo Mortera, the only two built for Cuba in the British shipyards of Liverpool between the end of the XIX century and the beginning of the XX century.

Fully enjoying nautical activities in Santa Lucía goes even beyond its limits, to Cayo Sabinal (with a surface of 335 km2 and more than 30 kilometers of virgin beaches), which can also be visited by road through a causeway little more than 2 kilometers long.

In Cayo Sabinal, ideal place for photo hunting, tours and nautical recreational activities; there are fresh water lagoons, where different species of the local fauna meet, among which out stands a large colony of pink flamingos.

The ruins of Fort San Hilario, the unique Playa Brava, the Faro Colón (Lighthouse Colon) built in 1894 and which later became an excellent lookout, evidence of the presence of native settlements and the attractive mountains of the eastern region are some of the reasons to visit this isle, whose purity and virginity make it a perfect place for the natural spawning of four species of sea turtles.

From Santa Lucía, it is also possible to visit the Ballenatos Islands, located inside the Bay of Nuevitas; or La Sierra de Cubitas, a mountainous region of 260 km. about 30 km. from the capital of the province, where the existence of more than 300 plants has been reported. Aboriginal pictographs can be found in the caves of Los Generales, Las Mercedes, Indio and Pichardo, and there are at least three natural accidents of great interest: Sima de Rolando, Hoyo de Bonet, and the gorge of Los Paredones.

The Historic Center of the City of Camagüey, second largest in the country, has rightfully earned being considered a must-see place for those who choose Santa Lucía as their holiday destination, being 110 kilometers away form each other with an infinity of charms to be discovered between them. 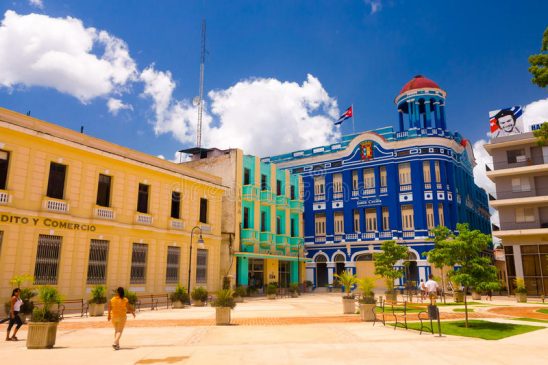 Camagüey is also known as the City of Tinajones, due to the widespread use of those large recipients of water made of cooked clay. Camagüey (known under this name since 1903) has a very particular urban construction style with narrow and tortuous streets that always end in squares and plazas, where we can still see buildings of outstanding historical, social and architectural value.

As well as the houses where important personalities were born; like Major General Ignacio Agramonte, hero of the first independence war; the poet Nicolás Guillén; the renowned scientist Carlos J. Finlay; and poets Gertrudis Gómez de Avellaneda and Aurelia Castillo.

The applies to the Teatro Principal (Main Theater), venue of the well-known Ballet Company of Camagüey, founded in 1967, and Casino Campestre, the largest of all the parks built in that Cuban city.

Visiting this city gives you the opportunity to enjoy the San Juan Camagüeyano, which became a traditional celebration between 1725 and 1728 that takes place in current times today from 24 to 29 of June; tasting typical dishes the local cuisine like the ajiaco, the jerked beef or the monteria. And at the same time get acquainted with the everyday life of a young generation of talented ceramists and get to know, first hand, a city that is considered an important cultural and scientific pilar of the nation and which gave birth, in the XVI century, to the first Cuban literary work, “Espejo de Paciencia” by the writer of the council, Silvestre de Balboa.

Despite of its low tourism development, Jardines de la Reina, located on the south coast, is another of the attractions for visitors interested in Scuba Diving, Fly Fishing, the exciting experience of swimming with sharks, or living unforgettable days aboard the Hotel Tortuga Flotante (Hotel Floating Turtle), run by Marinas Puertosol and anchored in the middle of the best preserved insular group of the Caribbean.